I Analysed 5,239 Australian Blogs – Here’s What I Discovered 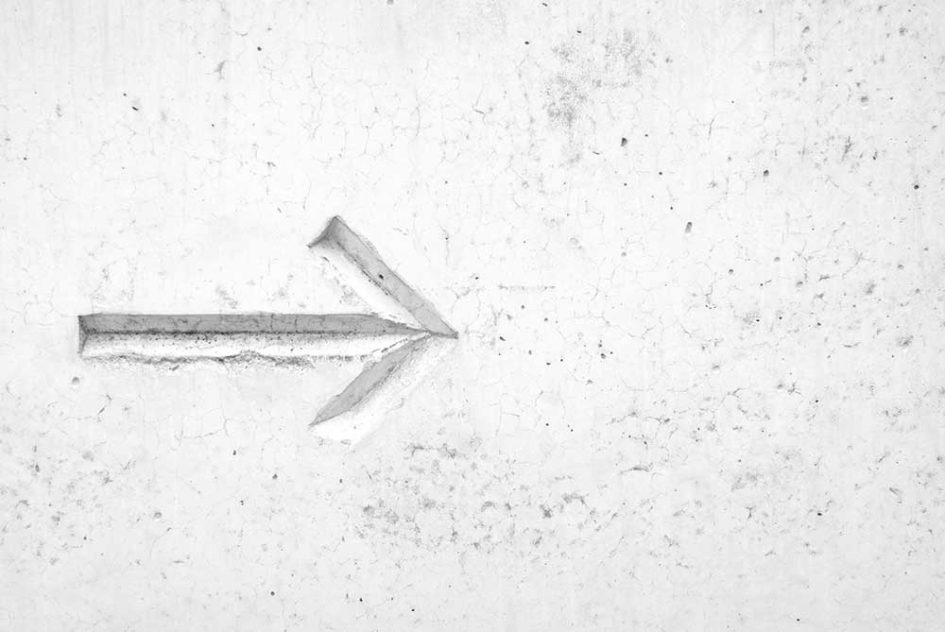 For many successful marketers, blogging is a large part of their success. In this article, I share the results of my research into the performance and SEO efforts of 5,239 Australian blogs.

As part of this research, I studied one blog post from each of these blogs. These posts alone add up to a total of 3,703,973 words, which is equivalent to just a little over 41 typical novels of 350 pages. A typical adult reads around 250 words per minute, so that’s roughly 247 hours worth of reading.

So, besides discovering there are plenty of words on the web, what other interesting facts did I discover? Let’s get into it and explain.

The first interesting discovery, is that the vast majority of bloggers prefer .com.au over .org.au or .net.au.

Without getting crazy specific, I looked at the domain rating score that Ahrefs allocates per domain name. Tools like Ahrefs create these scores, because search engines such as Google are very secretive about how and what they use to determine where a website will rank in search results.

Whilst there’s a trillion articles out there with details and many of them have significant data, we can’t say with absolute surety how Google treats each website or blog.

So, Ahrefs, having a database of trillions of pages and websites, knows a little about how to score a website. They state in this detailed explainer on their blog;

“Domain Rating (DR) is a proprietary Ahrefs’ metric that shows the strength of a target website’s total backlink profile (in terms of its size and quality). DR is measured on a logarithmic scale from 0 to 100, with the latter being the strongest.”

Essentially, what that means is that the ultimate success would be to get a domain rating of 100. The likelihood of achieving that is up there with riding unicorns and fixing climate change by this Sunday.

As an example, Google’s own Australian search engine, google.com.au, only gets a DR rating of 92.

So what the above chart reveals, is that more than half of Australian blogs have a DR of 20% or less. Less than 1% have a DR of 80 or more. Here’s that data in further detail.

This means that the majority of Australian blogs have poor SEO exposure, and are likely not to have very good search engine rankings, and therefore have smaller readerships. This would be similar anywhere in the world.

The low domain ratings could be for a number of reasons; poor or little content, poor keyword planning, infrequent posting, only being relatively new or a plethora of other elements (domain age, backlinks, domain history, spam score, trust flow, code quality, site speed, and the list goes on).

Let’s break that data down

So I wanted to segment these blogs into more useful groupings, so for all the graphs below, you will see that I have three segments. These segments are essentially the blogs split into halves by domain rating.

Blog posts consist (nearly always) of words. The first words a potential reader tends to see is the headline or page title. They see them on social media, in search engine results or in email newsletters and the like.

There have been plenty of international studies on what the ideal title length is, and how other blogs perform. Will there be a drastic difference between the best performing and worst performing Australian blogs?

What we’ve found here, is there’s hardly any difference at all. The shortest title was 5 characters and one word. The longest title came in at 178 characters (25 words). Experts tends to agree that the sweet spot for SEO tends to be 50-60 characters long, so the headline can be read in search engine results.

How a Headline will display in Google search results

The example search result above, shows that article has a headline of 60 characters (with spaces) and 11 words plus punctuation.

What words are most common in headlines?

So we know that there are roughly 8 words per headline in the 5,000 blog posts I collected. So, what words appear the most?

In the top ranking blogs, these are the ten most common words found in headlines.

Conversely, in the lowest ranking blogs, these are the ten most common words found in headlines.

Those eagle eyes would have noticed a few differences between these two top ten lists.

The number 10 appears in 9th position in the top ranking chart, and doesn’t appear at all in low ranking chart.

So why does the word ‘blog’ sit in the coveted first place on both lists? That is likely to be due to blog owners leaving the blog title in the page title, like the example below from one of the highest ranked blogs in my research.

This is where it gets more interesting. We know that on average, the longer the blog post, typically the better it will do in SEO.

Experts never agree on this topic, typically, and most spout off somewhere between 1,000 – 10,000 words are ideal. This research by Backlinko, where they studied one million search results, paints an interesting picture of how the top 10 positions on Google compared to content word count.

The graph shows even the page in tenth position (the last position by default) is more than 1,700 words long. 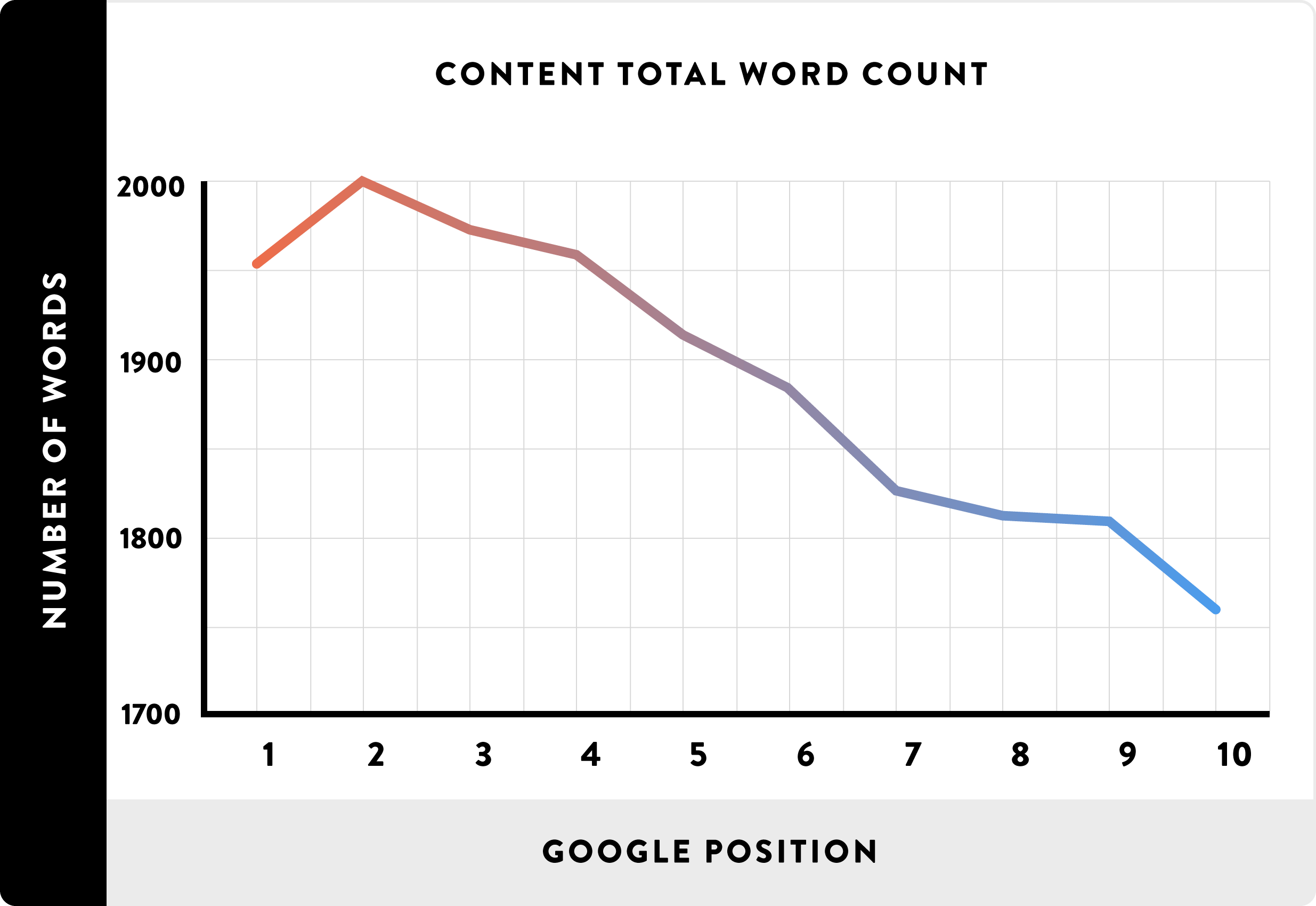 So, back to this study. Will we find that the total average word count of posts be drastically different between the low ranking and high ranking segments here?

Surprisingly, the longest blog post by word count was in the lower ranking segment, too. This behemoth comes in at a whopping 19,070 words. That’s equivalent to 57 pages long. The topic? It’s all about the Pearson English Language Test, which is a test that migrants need to pass to move to Australia.

This blog post, in comparison, is 2,100 words long (and took hours to put together!).

Do Australian blogs attract many backlinks?

We know that a large component of the Google ranking algorithm is related to the amount of external unique links a website has, pointing to it (often referred to as ‘backlinks’).

So, how many backlinks are Australian blogs typically attracting? 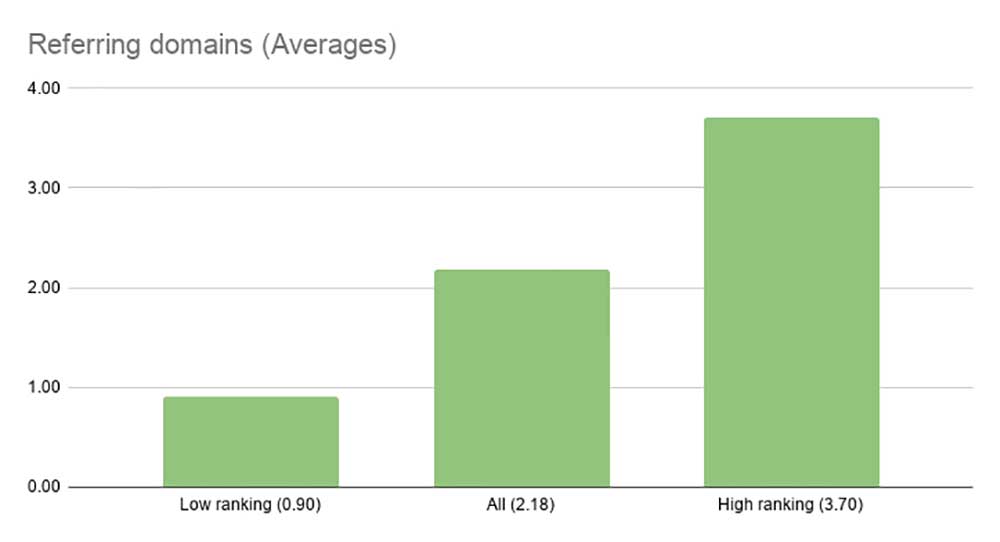 The chart above shows that, on average, we receive an average of 2.18 backlinks per blog post. What is most interesting here, is that the higher ranking blogs receive over 400% more links (3.70) than the low ranking blogs (0.90).

All bloggers need to do what they can to increase the amount of backlinks they can get, pointing to their blogs. However, as my last blog post proved, not all backlinks are created equal.

Do Australian blogs get shared?

Success for bloggers isn’t all just search engine exposure. Many bloggers tend to look at the social media shares that their content gets, as part of their metrics.

So how does the Australian blogosphere go, when we measure average social shares per blog?

Note: A note on these statistics too; these only count the three social networks, Pinterest, Facebook and Twitter. Other networks like LinkedIn are not included. Also, the shares are only public shares. So, sharing an article on Facebook to only your friends will not count towards these percentages.

These are the numbers that astounded me. On average, Australian blogs are shared 315.7 times. That’s a healthy amount of shares.

What’s most interesting, is where these shares occur.

Let’s first look at all Australian blogs, combined. Pinterest is ahead, at 164.8 shares. Coming in second is Facebook with 147.2 shares. Lastly, is Twitter at a lowly 3.68 shares. 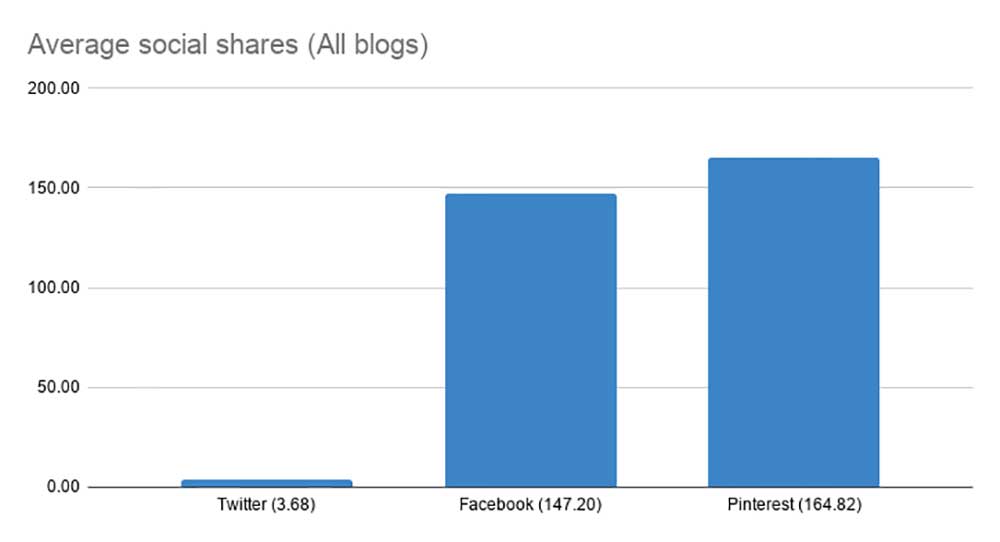 So how do the higher rank blogs perform on social media?

They enjoy 565 shares per blog, way above the overall average of 315 shares. Statistically, the shares per platform aren’t super different either. 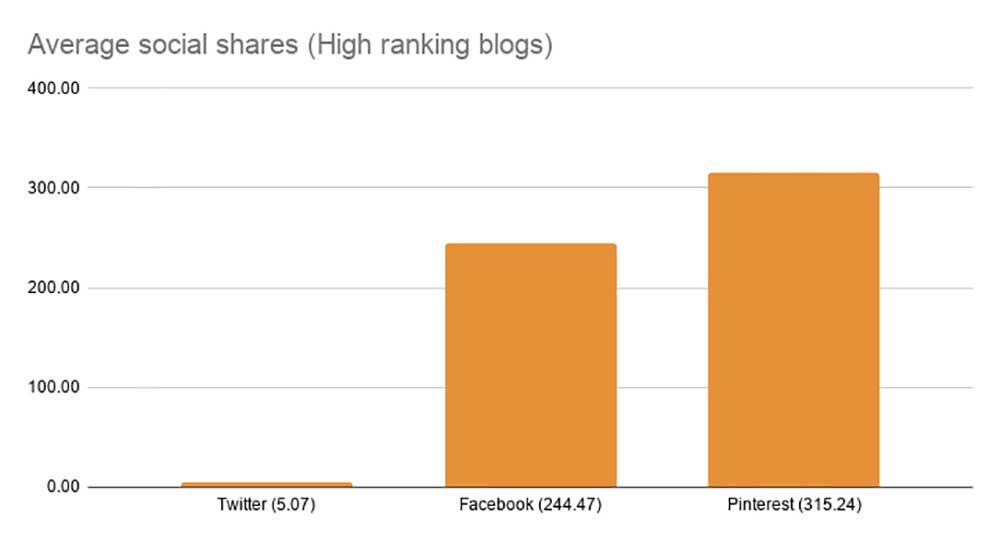 Now let’s turn out attention to the same three social platforms, and look at the lower ranked half of the Australian blogs I looked at. This shows 66.53 shares per blog, overall, which is a pittance compared to the higher ranked blog average of 565 shares each.

What really makes this segment also fascinating, is where these social shares are happening.

In front by a significant margin, is Facebook, with 49.89 shares per blog. Second place is Pinterest with 14.36 shares, and lastly (again) is Twitter at 2.28 shares per blog. 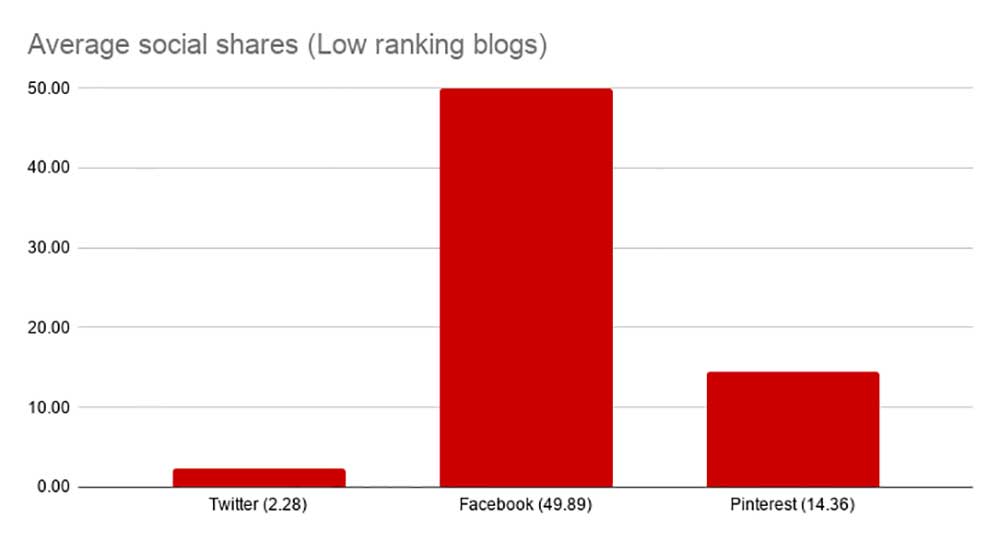 That is a complete contrast to the higher ranking blogs, who all enjoy huge numbers on Pinterest.

We all know Pinterest is a very visual platform, like Instagram, 500px, Tik Tok and others. So we would expect to see photographically heavy topics to be the most shared here. We would be right; the top 10 most shared blog posts on Pinterest are all about recipes and gardens.

The most shared Australian blog on Pinterest is Hoselink, who enjoy a whopping 921,000 Pinterest viewers a month on their Pinterest board which is primarily about gardening.

Facebook can be an emotive place. That’s part of it’s charm and regularly it’s also said to be one of their downfalls. So we can’t be that surprised to find the highest shared blog post on Facebook, at over 78,000 shares, is about getting through grief on Father’s Day.

Twitter is often the home of breaking news and current affairs discussion. I wasn’t at all surprised that the most shared post on Twitter was on politics and police raids on a union office.

Tools used in this research

Thanks to the companies and developers behind the three great software tools I used, to crunch and format all the data above. They are;

Ahrefs
Ahrefs is an SEO industry analytical software suite, which I have mentioned countless times prior.

Word Count Tools
This is a great browser based tool, that allows you to do all sorts of fancy word analysis, way beyond the counting that their name would imply.

Google Sheets
Google sheets is my go to spread sheet tool, which also comes with a very easy to operate charting function.

This was an enlightening exercise to undertake, and I’m sure you have found the results just as interesting as I did. What we can agree on, is;

I hope you found my efforts and this post worthwhile, and all the best for blogging success in the year ahead!

Data for this research was collected during November 2019, using data I extracted from the Ahrefs dataset, which contains approximately 16 trillion known URL’s. I exported data for URL’s that contained both the .au country domain extension, as well as the word ‘blog’. After removal of duplicates, etc, I was left with 5,239 unique Australian domains which I used for this study.

The obvious shortfall in this approach is that I only studied blogs using .au domains, so Australian owned blogs on .com or .co or other domains (such as this one) were not included.